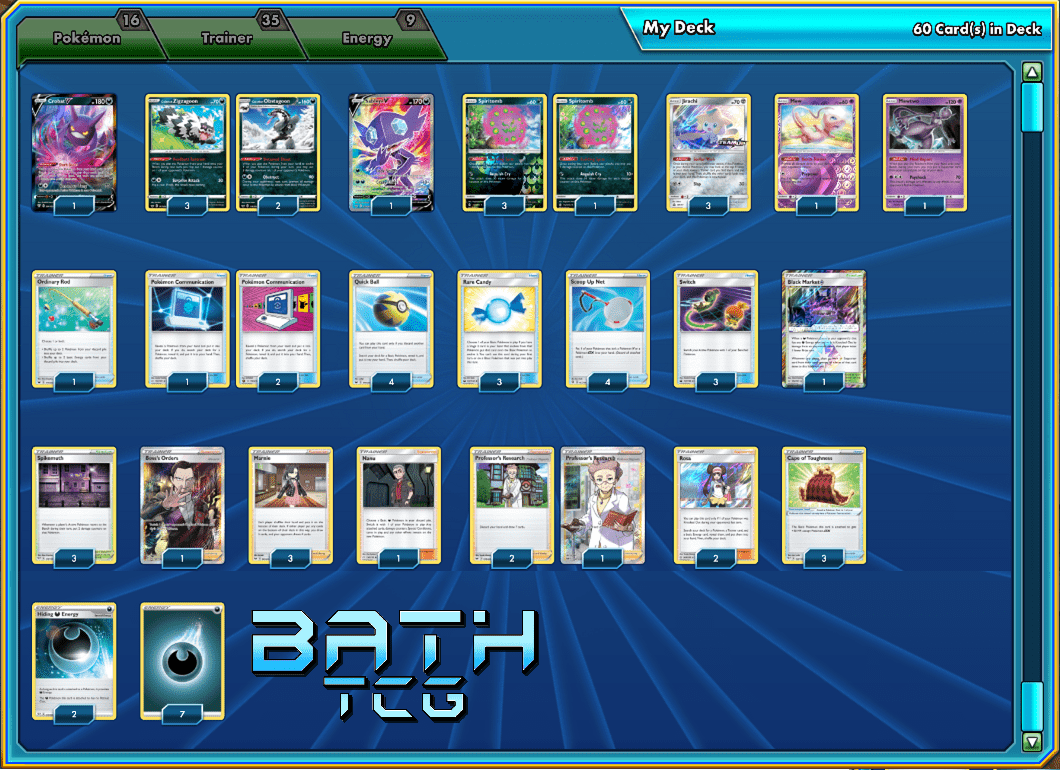 Let me introduce you to my favourite deck at the moment Spiritomb Goons, it relies heavily on Spiritomb and Obstagoon. This deck does well against multiple prize Pokemon which are currently ruling the format, but it can also deal with tiny health Pokemon such as Snom and the Mad Party deck with Obstagoon’s spread abilities.

The first few turns are set up and aiming to spread damage counters on your Spiritomb and your opponent’s Pokemon. You may be able to get a early KO if your opponent has low health Pokemon in the active such as Jirachis or Zigzagoons these early prizes often help secure wins for you, though sometimes it maybe wise to not attack if you only have one powered up attacker.

If you are facing only basic Pokemon Obstagoon is a must to set up and you can do this often with the help of Jirachi and Rosa, it means your opponent needs a Phione (Cosmic Eclipse) or a Boss’s Orders to switch you out of the active but as Phione (Cosmic Eclipse) sees little to no play currently it forces most opponents their supporter for the turn to attack.

This deck is always a numbers game it heavily relies on knowing the numbers that both Spiritomb and Sableye V can hit, for Spiritomb important numbers are 2 dc (damage counters) 70 dmg (damage done), 4dc 130dmg, 7dc 220 dmg, 10dc 310 dmg. 10dc is the max amount without KOing it on Spiritomb with a Cape of Toughness attached this. Sableye V needs the dc’s to be on the opponent’s active Pokemon and the dmg will be the total amount of damage on the Pokemon at the end of the attack (no modifiers), the key numbers are 3dc 220dmg, 4dc 290dmg and 5dc 360dmg.

Mewtwo :- This is used to recycle your supporters, most importantly your one offs such as Boss’s Orders and Nanu. As it goes to the top of your deck this mostly used to combat Marnie but can be used with Crobat V or Jirachi to get a supporter for your turn.

Mew :- This is easy to see it will protect your low health Spiritombs from being KOed on the bench. This is mostly only used against the Inteleon VMAX match up, but makes a difficult match turn in you favour.

Ordinary Rod :- Is a slight stall/mill counter in this deck to return energy back to my deck if too many are discarded. This can also be used if tech Pokemon get KOed or if to many Spiritomb get prized, though some game may not need it, Ordinary Rod will help you win games.

Nanu :- The one downside to this deck is that the damage output is limited to 310 from Spiritomb and this is often hard to reach. But Nanu can help hit OHKO’s on 3 prize Pokemon with Sableye V as you can use Nanu to switch it with a Pokemon with an energy attached previously and Sableye V can OHKO most things if they have 5 or more damage counters on them. It can also be used to switch a damaged Pokemon with a Spiritomb to get a high hitting attack quickly.

Sableye V :- As stated before it is mainly used with Nanu, but it can also be set up on your bench if required to attack with high damage.